It was well after midnight when we got back to our hotel. I was going up in the elevator with my friend and Bacon Brothers band mate Ira Siegel. He said: “Man, this was the kind of day you wish would never end.” That about sums it up.

We’ve been touring on and off pretty much all summer long. We were in the last and longest stretch, which brought us through Nashville, Atlanta and on Sunday, August 3rd to Charlotte, NC. Throughout the tour Kevin, either on is own or with Michael were visiting businesses and not-for-profits which are doing meaningful work to make our crazy world a little better. The “drop-ins” were organized by the wonderful Dan McCabe who manages Kevin’s charity project sixdegrees.org.

While riding up in our tour bus from Atlanta Kevin asked if we would join them that afternoon in an unplugged performance for 20 families at Ronald McDonald House Of Charlotte. Regardless of what you may think of fast food, this not-for-profit arm of the McDonalds Corporation does truly amazing work directly in communities all across the country. Here’s the link to RMcD house of Charlotte: http://www.rmhofcharlotte.org/

I’ve done my share of charity shows over the years performing at fund-raisers large and small but also in hospitals, firehouses and schools. No matter how many of these I do, nothing prepares me for the outpouring of emotion that settles over the audience and performers.  For that moment in time we are all somehow united at the heart. For this show we had no amps or sound system what so ever, which made the connection that much more direct. I’m not one who goes in for organized religion but I think these occasions are what a house of worship ought to feel like. I say this with absolutely no ego. It is not about the performer. Kevin and The Bacon Brother’s celebrity helped to make it happen but the children in that room had no idea who we were. Certainly their parents knew Kevin. Some even knew about the band. But honestly that’s not what mattered. We were all in the room together to help one another feel good or at least feel better for a little while. And to let them know people cared about them. 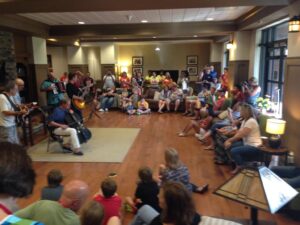 The Bacon Brothers Band at Ronald McDonald House of Charlotte. The song we are playing here was appropriately called “Wonderful Day”.

After a group photo with the families, lots of handshakes and hugs we got back on the bus. It remained quiet for some time. Most of us lost in thought about the experience we had just had and sorting out our feelings. It’s complicated. No doubt we had done something good but it never seems to be enough.

Earlier in the day Frank had gone for a run near our hotel and noticed a bunch of tour busses rolling through town. He, being a smart guy for a drummer realized they were not ours. So he Googled around and discovered that James Taylor was performing just outside of town. All of us are HUGE JT fans. We begged our manager Chris Bailey (Sometimes known as Warden Bailey because of his strict tour management style) to wrangle us tickets. He made a few calls, tracked down the right people (on a Sunday BTW) and procured us VIP seats and a “Meet And Greet” with JT and his band. Ironically, the tables were turned. Now we would have to wait in line to meet the star.

The show was at a shed-style performing arts center like Tanglewood or Wolftrap. The sky was clear, the stars were out and the temperature a perfect 75 degrees. The concert was of course off the charts amazing. Honestly, he has never sounded better. We got to hear JT sing “Going To Carolina” in Carolina. That’s kind of like hearing “New York, New York” at Yankee Stadium. Everyone in the amphitheater stood up and sang along on the chorus. Ear to ear smiles all around us.

After the show we hung out with everyone in his band. Some of us already knew some of them. Ira had worked with “Blue” Lou Marini and actually did a couple of gigs with JT subbing for Michael Landau. Is there anyone Ira has not worked with? Frank got to talk shop with the great Steve Gadd. Amazingly, they’d never met. It’s rare that I see Frank get this excited about anything other than a meal at Blue Hill. Seriously, he was really pumped. He even got a picture of the two of them which I’m sure was on the web within seconds. JT, Kevin, Michael and me. Clearly, I am in deep thought wondering what I can say to James that will not make me sound like an idiot fan boy.

Then we met JT. What a delightful human being. Gracious and charming. All of us were in awe of his vocal stamina. After a 90-minute concert he did 45 minutes of meet and greet. All that singing and talking! He told Michael that he does one hour of vocal warm ups every day. We had the chance to tell him what people sometimes tell us. “We are BIG fans of yours. We love your music. Thank you.”

In some weird way our day had come full circle. Maybe getting to see James was cosmic payback for visiting Ronald McDonald House. Back on the bus to the hotel we cracked a bottle of wine and toasted to… what exactly? Friendship? Life? Health? Music? Let’s toast to all of it.

Like Ira said, it was the kind of day you wish would never end.