The greatest feeling a songwriter can have is when a singer tells you that they want to perform or even record your song. Happily, that has happened to me few times. In one case there’s an interesting back-story that’s worth telling.

In the fall of 2014 I was invited to do a wonderful local radio show here in Rockland County which is where I live just north of Manhattan. It’s called “Live Song Radio” on WRCR and is hosted by noted musician and songwriter Brian Muni. Songwriters like Julie Gold, Tom Chapin, Richard Barone, Jake Holmes and vocalists like Darlene Love and Amanda Homi have all appeared recently on the program. As the title of the show suggests, songs are at the center of the discussion. Three invited guests each perform a couple of their tunes live, sometimes backing up one another. As they say in the UK it’s “a chat show”. It’s very casual and lots of fun. Occasionally people are meeting for the very first time while on the air.

Such was the case the night I did the show with my good friend and Bacon Brothers band mate Michael Bacon. I suggested that Brian invite him as we had just finished our 2014 tour and were already missing hanging out on the gigs. Being the good producer/host that he is, Brian asked if per chance Kevin could also make it up for the show. This was unlikely because he had just started shooting the third season of The Following and was busy with 16 hour days, but I would ask. Brian said that he had a guy lined up to be backup guest for Kevin, just in case. It was Italian rock tenor Micheal (sic) Castaldo. The show was airing around Columbus Day so he thought he’d add an Italian flair to the evening. As my name also ends in a vowel I had no objection. Mr. Bacon would just have to tolerate a couple of paisanos chewing the fat. Capisci? As it turned out Kevin couldn’t make it so Castaldo was in.

We had a ball singing and playing live on the air. I did a new song called Last Night In Vegas. Michael Bacon debuted a new song called Two Rivers. Micheal Castaldo sang one he wrote in honor of his dad with a beautiful Italian melody and was called Pray’r. I understood not a word. You see I am Italian but children of my generation and born in the USA were discouraged from speaking or even learning Italian. Our parents and grand parents wanted us to “be Americans” and assimilate. Micheal was born in Italy and raised in Canada. English is his second language. 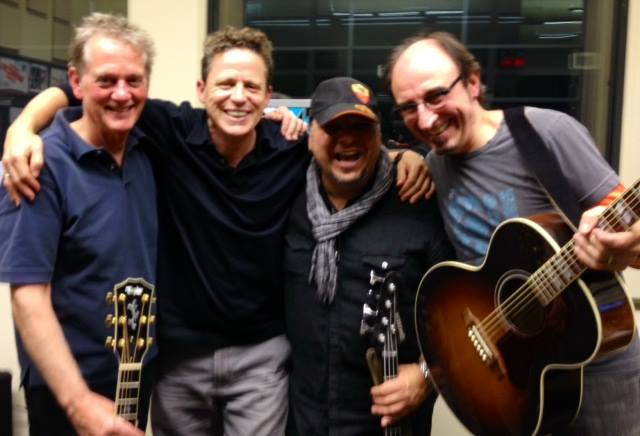 After the show we all traded CD’s. To be honest this is a tradition among performers but really, none of us seriously expect the other musicians to pop that thing right into the CD player the minute we wave goodbye. Still, that’s what happened that night. Micheal Castaldo (bless him) actually did put my CD Chasing The Moon into his car stereo and cranked it up for the drive home to Manhattan. The very next day I received an email saying that once he heard the song he put Everything Happens For A Reason on auto repeat and had listened to it dozens of times. What!!?? The day after that he emailed again and asked if me and my songwriting partner Mike Greenly (Yes, there are a lot of Mikes in this story!) would allow him to translate the song into Italian and that he wanted to put it out as his next big single. Well let us think about it for a… yes! Are you kidding?

In all seriousness, Castaldo found great meaning in the lyrics. The song and melody deeply moved him. The phrase Everything Happens For A Reason is one we’ve all heard throughout our lives. I remember my mom using it when she couldn’t explain a situation to me as a child. Mike Greenly heard a contestant on American Idol use it and that got him thinking. “Hmm, could that become a song title?” As it turned out the weeks following Mikes thought were filled with terrible news from all over the world. Mike tapped into that convergence of angst and sent me one of his best song ideas. After a few back and forth sessions we had a completed lyric that I truly believe transcends an everyday phrase that could have been cliché. I released it on Chasing The Moon in 2013 and was rewarded with some heartfelt reactions to the song. One couple in the Midwest had suffered a terrible loss and contacted me because they wanted me to know that the song helped them get through the hardest of days.

Micheal Castaldo did the Italian translation, which is called Una Ragione and his team has created over thirty lyrics video translations. There is even one in the works using international sign language. His hope is that everyone on the planet will feel what he did when he first heard the song. I am honored beyond words and hope that people everywhere can find a measure of hope in this song.

Think about it, what if my other band mate Kevin had come to the radio program that night instead of Micheal Castaldo? None of this would have happened. Yes, everything happens for a reason.

I’ll be performing this song at my solo shows beginning at The Turning Point on Thursday May 8th. I may even take a crack at singing a verse in Italian!