I landed a great gig at Infinity Hall in Norfolk, Connecticut on Oct 26. It’s great for two reasons:

Over the years I’ve been fortunate enough to cross paths with David and his band at concerts and festivals. Most recently at the Tom Rush 50th Anniversary Concert at Symphony Hall last December. There, as on other occasions I got to play bass behind him for his part of the show. For those of you who have followed David over the years you know what an honor it is to be in that exalted position. For a few minutes at least I was in The David Bromberg Band.

David’s a “cat”.  I love listening to his road stories, and lord knows he has road stories. No, I will not give anything away here. But I will tell one of my own.

I was on a tour with Tom Rush when his band consisted of me, David Buskin, Robin Batteau and Marshal Rosenberg. It was the mid-eighties and Bromberg was deep into the study of violin making. David was on the bill with us that night. We were all off stage left while Tom was doing his three song solo segment in the middle of the concert. Batteau (who is a violinist) was talking with Bromberg about his instrument. He asked David what he thought of his violin. David took it from Robin. He examined it closely and with a very serious look in his eyes pointed to one part of the body he said: “do you see this part right here”? Then he lifted it to his mouth and bit off a section of the binding. Batteau was speechless. The rest of us were trying to stifle our laughter. Tom Rush looked sternly our way from the stage as we were convulsing. Then we had to go out and play the Robin Batteau opus: “The Boy With the Violin”! Perfect. 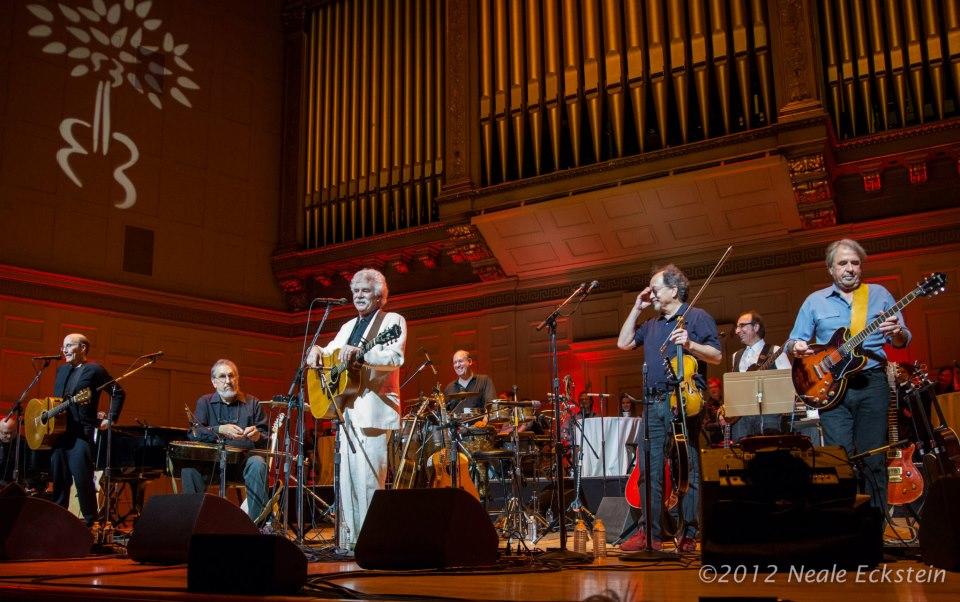 At Symphony Hall (2012) with David Bromberg on dobro with Tom, Marshal and me. Yes, that’s Robin holding “the violin” all is forgiven. With David Buskin far left and Trevor Veitch far right.

David is too cool to have an ego about it but he is admired by and even a hero to musicians worldwide. I discovered him through my manager Allan Pepper who, handing me a promotional LP of David’s 1972 self-titled first release on Columbia Records said: “listen and learn”. By then he was already a legendary sideman in the Greenwich Village folk scene for people like Bob Dylan, Jerry Jeff Walker, Tom Paxton and others. He was an in demand session player and had even written a song with George Harrison called “The Holdup” which was on that Columbia record.

What I love about him is his eclecticism. He is a bluegrass picker, a blues man and a rocker. He is fluent in jazz and jug band. He is a songwriter and an amazing entertainer who could hold the audience in a trance one minute and have them in a fit of laughter the next.  Many of his records are an unusual mix of live and studio recordings because David was equally at home on stage as in the studio. The studio is never the “sterile environment” critics sometimes claim it can be when David is making music. For him, technology is at the service of performance.

Thanks for letting me open the show David. I hope music lovers within driving distance of Infinity Hall take this opportunity to come out and see what I’m sure will be an unforgettable evening of music.